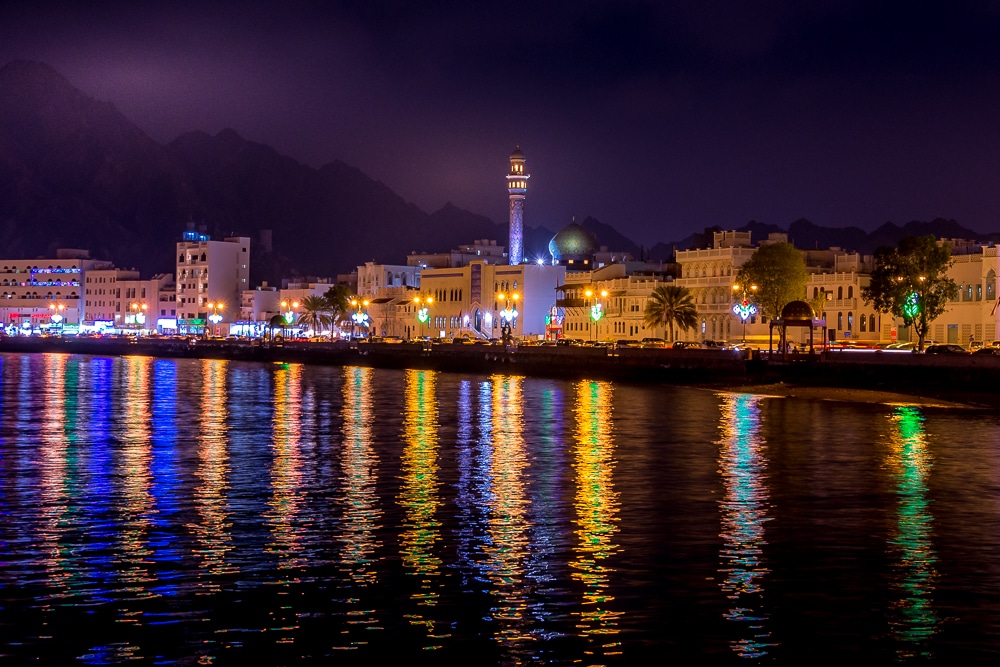 We explore the best things to do in Muscat, Oman’s delightful oceanside capital

Pinched between the mountains and the ocean, Muscat is a refreshing take on the skyscraper-choked cities of the Gulf States. The Omani port capital may not have the overt glitz of its high-rise neighbours, but it exudes an understated charm and natural beauty rarely seen in the more popular cities of the UAE, Qatar and Bahrain.

We recently spent a week in the north of Oman, starting in Muscat (which translates as ‘safe anchorage’). Here’s what we liked best about this unique city.

Best things to do in Muscat

The best things to do in Muscat can be squeezed into a day of brisk sightseeing. However, if you enjoy shopping (which we don’t) or simply having the time to mooch and take in all the sights at your own pace (which we do) then the below sites are best spread across two days.

Completed in 2001, this magnificent piece of modern Islamic architecture was a gift to the nation – like many things in Oman – from Sultan Qaboos, the longest-serving leader in the Arab world. Built to mark the 30th year of his reign, the mosque can accommodate 20,000 worshippers.

The centrepiece of any visit is the main prayer hall, which houses an enormous chandelier and a grand hand-loomed carpet, the second largest in the world at 4,343m2 in size.

To visit, women should cover their hair, legs and shoulders.

Built by the same architects of the Grand Mosque, the Royal Opera House Muscat exhibits similarly striking features. Glinting marble and inlaid wood fused with arabesque architecture provide quite the display of extravagance.

There are short tours of the opera house running throughout the day. These visit the amphitheatre which can accommodate 1,100 people and the foyer areas where a grand symmetrical staircase leads to the upper stalls.

Housed in another grand whitewashed building in the heart of Old Muscat, the National Museum stands opposite the Sultan’s Al Alam Palace. The museum is remarkably uncluttered, but what it lacks in quantity it makes up for with quality.

The 14 galleries cover the history of the region, from the earliest human settlement in the Oman Peninsula some two million years ago up to modern times. Galleries of note include the Maritime History (lots of boats and ships!) and the Arms and Armour (lots of swords and guns!).

There is a 15-minute film that covers the history of Oman somewhat more quickly if you’d like to streamline your visit. The film runs in a number of languages; ask a member of staff for timings upon arrival.

The ceremonial palace of Sultan Qaboos (he prefers to reside in his seaside palace near Seeb) is closed to the public, but its tree-lined avenue and blue and gold mushroom pillared façade make it worth a visit.

We suggest walking along the pedestrianised avenue running from the National Museum up to the gates of the palace to snap a picture through the railings. Then, skirt left around the grounds to view the palace from the waterfront along the harbour wall on Mirani Street.

These two forts stand guard at the entrance of the harbour to the rear of Al Alam Palace overlooking the Sea of Oman. They were constructed during the Portuguese colonial rule of Oman during the 16th Century. Al Mirani is closed to the public, but it is worth strolling along Mirani Street beneath its ramparts.

Al Jalali sits on the opposite side of the harbour and is only accessible by a steep staircase. It is possible to visit, but strictly by permit only. We are told that tourists can apply to visit the fort via the Ministry of National Heritage and Culture website (under construction at the time of writing).

If you enjoy shopping and haggling for traditional textiles, souvenirs and jewellery then the busy alleyways of Muttrah market will be right up your street. There is also a smattering of coffee houses and cafes inside.

Kia and I aren’t fond of shopping so we hurried through the souq and headed for the cool breeze of the waterfront instead.

A stroll along the waterfront at Muttrah Corniche is a Muscat-must. Muttrah stretches along a redeveloped area of the once industrial port. It’s certainly worth visiting in the afternoon, but we suggest returning for sunset or in the evening when the city lights twinkle in the water.

The cornice mosque’s minarets, latticed buildings and the jagged foothills of the western Al-Hajar Mountains are pleasingly picturesque. Over in the harbour, you will likely spot the sultan’s 155m superyacht – said to be the second-longest of its kind (though this is contested).

The sultan’s yacht wasn’t available, so we headed out on a sunset cruise aboard a traditional wooden dhow, albeit now fitted with an outboard motor and a comfortable cushion-covered deck. Cruises run from the Marina Bandar Al Rowdha to the south of the city.

The two-hour cruise cuts into the sheltered waters in front of the Portuguese forts guarding the Al Alam Palace and then along the city’s waterfront.

Bandar Al Khairan is not strictly in Muscat; it’s actually located around 30 minutes to the southeast of the city. There are many (mostly water-based) activities available in the khors (inlets) and bandars (natural harbours) of the area, including kayaking and snorkelling.

Whether you’re water bound or not, the scenic drive along the coast and the popular picnic spot at the Bandar Al Khairan Viewpoint perched above a small beach are worth the journey alone.

Things to do in Muscat: the essentials

What: Exploring the best things to do in Muscat, the capital city of Oman.

Where: We stayed at the luxurious 5-star Kempinski Hotel Muscat located in the modern community of Al Mouj, a 20- to 40-minute drive from all the best things to do in Muscat. The beachside resort has a spa, two swimming pools and a choice of 10 bars and restaurants.

When: The best time to visit Muscat is October to March when the oppressive summer heat settles to sunny days and balmy nights. Note that it does rain in Oman so plan accordingly.

How: We took a six-day trip through Oman with Old Muscat Tourism who specialise in showing customers ‘7,000 years in 7 days’. Our guide, Adil, was knowledgable and flexible and went out of his way to fill our day when our path to Jebel Shams was washed out by the rain.