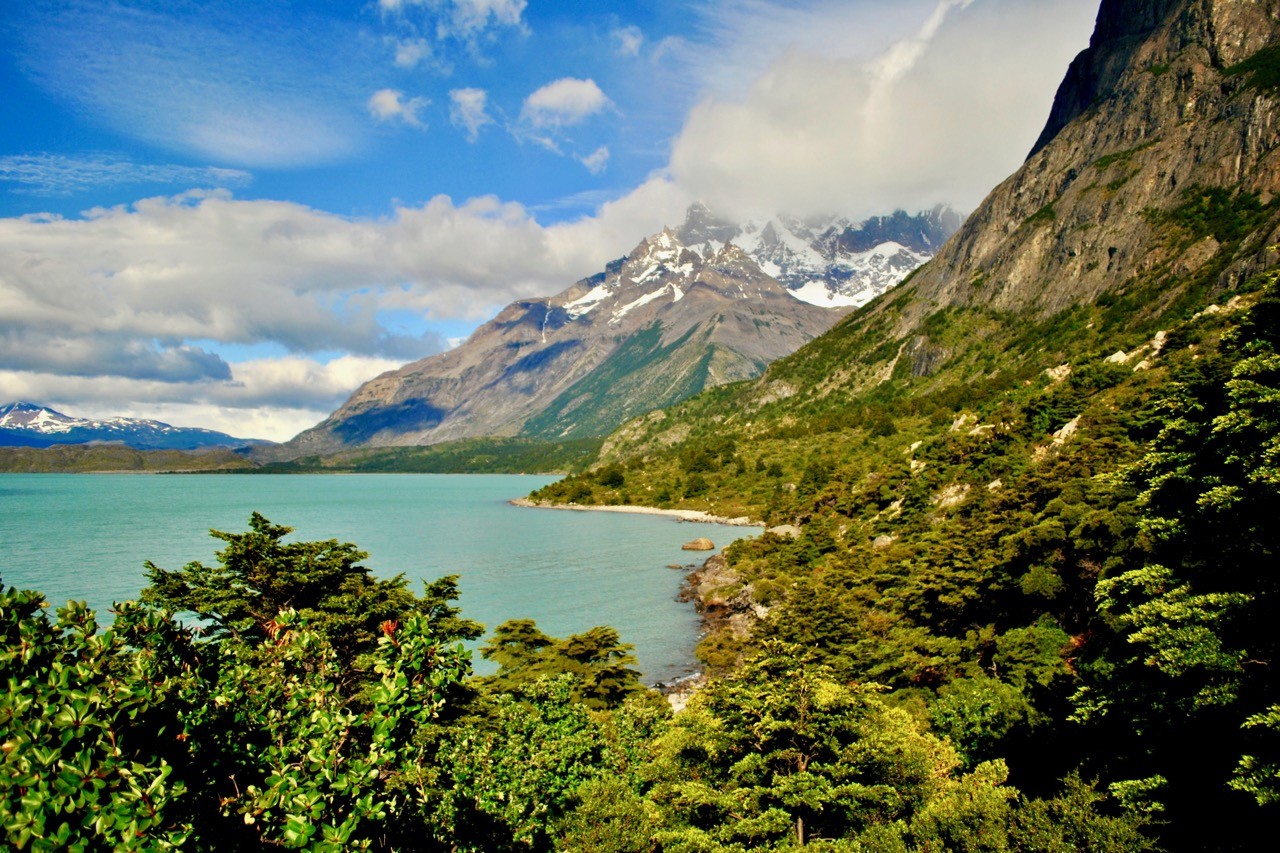 The USA knows how to do wilderness. Not only does it boast practically every landscape under the sun, but most of it is accessed via the unrivalled National Park Service, which incidentally celebrated its centenary this year.

The national parks are fantastic: accessible and well organised with excellent facilities and some of the finest natural beauty in the world, making America one of the best countries for hiking.

The array of different landscapes on offer in the country makes it an adventurer’s dream. Wedged between the two great oceans of the world, mountains, beaches, rainforest, deserts, canyons and glaciers rise and fall across this continent-sized country.

The Triple Crown of American long-distance hiking trails (the Pacific Crest, Appalachian and Continental Divide) steal the limelight, but there are endless networks of trails across the country. Highlights include iconic landscapes such as the Grand Canyon, Yellowstone National Park and the Great Smoky Mountains of Tennessee and North Carolina.

Don’t overlook the non-contiguous states either. Alaska boasts the country’s highest mountain and a member of the seven summits, Denali, while Hawaii is home to beaches, volcanoes, Jurassic Park-esque landscapes and the world’s tallest sea mountain.

Read more posts on the USA

I have said before that I have unfinished business in Chile. That business is completing all 84km (37mi) of ‘The W’ through the Torres del Paine National Park in Chilean Patagonia.

In 2013, National Geographic ranked Torres del Paine National Park in Chile as the fifth most beautiful place in the world and it’s easy to see why when you’re walking amid giant ice-white glaciers, sapphire green lakes and the granite towers of Las Torres that define the region.

However, hiking in Chile isn’t just about Andes and Patagonia. There is the driest place on the Earth in the Atacama Desert, the temperate rainforests of Cochamó Valley and the vast and varying Lake District area. There are 36 national parks to explore in Chile with something for everyone, making it one of best places to hike in the world.

Next week, we’re heading to Norway for the third time, this time to the Arctic Circle to hunt for the northern lights. It’s an expensive country but the high levy doesn’t put us off. Norway is arguably the best country in Europe for hiking and cross-country skiing and definitely one of the best countries for hiking in the world.

What would you expect from the country that defines polar exploration? It was, after all, the Norwegian Roald Amundsen who beat Captain Scott to the South Pole over a century ago.

Only vast Russia and remote Iceland have a lower population density than Norway, meaning it doesn’t take much to clear the city limits and get into nature. The country has excellent access-to-wilderness laws, essentially meaning you can camp anywhere as long as you’re 150m (500ft) from a building.

The hiking infrastructure is superb with a clearly marked network of hiking and skiing routes supported by well-maintained refuges and campsites. These are run and maintained by the outstanding DNT (Norwegian Trekking Association) – an excellent resource for anyone hiking in Norway.

The scenery is stunning. Whether it’s the western fjords, gigantic glaciers or snow-capped crests – including Scandinavia’s highest mountain, Galdhøpiggen – or the remote Arctic archipelago of Svalbard, Norway has some of the wildest landscapes in Europe.

Perhaps an obvious choice on a list of the best countries for hiking, but Nepal cannot be ignored. The landlocked nation of Nepal is dominated by the Himalaya. The mountain range is home to the world’s highest peaks with seven of the world’s 14 eight-thousanders in the Nepalese Himalaya.

Nepal is commonly divided into three physiographic areas: mountain, hill and the Terai plains. The country is essentially designed for hiking!

Outside of the obvious Everest basecamp, Annapurna and Manaslu basin routes, there is the excellent Upper Mustang Trek which follows an ancient salt trading route between Tibet and India. Closed to foreigners until 1992, Mustang is only now beginning to open up to trekkers and western tourism, and offers an excellent cross-section of the three geographical regions of Nepal.

An often overlooked option is hill trekking in the Ghorepani Poon. Far less taxing than the high mountain passes and ice fields of the highest mountains on Earth, this relatively rolling region offers stunning hiking options through beautiful rhododendron forests and hospitable Gurung villages. It’s not all death zones and crampons in Nepal!

The South Island of New Zealand has a reputation as an outdoor lover’s paradise and quite rightly so – it has over 500 hiking trails. The island is divided by the great Southern Alps, the mountain range where Edmund Hilary honed his mountaineering skills before finally conquering Everest in 1953.

The North Island, although not as wild as the South, still offers an array of topography. Its defining characteristics include a warmer climate, tropical coastlines, volcanic activity, ancient forests and a rich cultural history including the majority of the indigenous Maori tribes. Sounds incredible!

Sweden is home to one of Europe’s last wildernesses: Lapland. And within it is one of Europe’s finest long-distance hiking trails, the Kungsleden (King’s Trail) through Sarek National Park. You need to be the adventurous type just to make it out here as there are no marked trails, cabins or amenities that you may find elsewhere.

Further south, and in rather less inhospitable lands, there are hundreds of excellent trails to follow. In central Sweden, in the province of Dalarna, there is the Vasalopp Trail (Vasaloppsleden) and further south still, in a relatively balmy climate, are the Blekinge, Skåneleden and Halland trails. The Skåneleden Trail is a 100km-long footpath through the beautiful countryside of Skåne.

In all, Sweden has nearly 400 hiking trails which (outside of Sarek) are usually clearly marked and dotted with 350 well-maintained hostels, mountain stations and huts. These are run and maintained by the excellent STF (Swedish Tourist Association), a first-rate resource for hikers visiting Sweden’s great outdoors.

Sweden, like Norway, has the Right of Public Access (Allemansrätten) enshrined in its constitution. To the bushman’s delight, the law effectively means hikers can go anywhere in the country as long as the surroundings are left as they were found.

There are thousands of hiking trails in Canada, from well-trodden, well-marked paths to rugged and wild tracts through the wilderness. And in a country the size of Canada (the second largest in the world), the long-distance hiking trail is king.

The pinnacle is the National Hiking Trail (also known as the Trans Canada Trail and formerly the Sentier National Trail). The NHT footpath will eventually be a 10,000km (6,2000mi) coast-to-coast hiking trail across the entire country. Wow!

Canada is also home to the Great Divide Trail – for the hard-core hiker only! The GDT is a wild and epic long-distance hiking trail that stretches north to south through the Canadian Rockies. The trail closely follows the Great Divide, the mountainous hydrological divide that splits the North American continent in two.

The GDT crosses the divide no less than 30 times making for a punishing route. It starts in Waterton Lakes National Park on the Canada-US border (where it connects with the USA’s Continental Divide Trail) and ends in Kakwa Provincial Park north of Jasper National Park.

Argentina boasts the Patagonian steppe, hulking glaciers as well as the highest non-technical mountain climb in the world. The second-highest summit of the seven summits and the highest mountain outside of the Himalaya and Asia, Aconcagua is an awesome mountain for professional and amateur climbers alike.

Argentina also has the lion’s share of the Southern Cone of South America and with it comes an even more expansive landscape for hikers to explore. The routes around El Chaltén are some of the best hiking routes in the world. The imposing towers of Fitz Roy and Cerro Torre steal the show but the magnificent World Heritage-listed ice fields of Parque Nacional Los Glaciares have as much to offer.

Hiking in the Reserva Faunística Península Valdés is one of South America’s best wildlife experiences. Sea lions, elephant seals, guanacos, rheas, Magellanic penguins and countless seabirds can all be seen. With 400km (248mi) of coastline, there’s even the opportunity to spot the endangered southern right whale.

Argentina’s Lake District on the northwestern wedge of Argentine Patagonia is another epic destination for hiking. It’s a land of picture-perfect glacial lakes surrounded by verdant forests, serrated peaks and dormant volcanoes.

Finally, to the south of Patagonia is Tierra del Fuego, the southern tip of Argentina and the famed ‘end of the world’, the last huddle of humanity before the wasteland of Antarctica. Phew!

Thanks to over 65,000km (40,000mi) of waymarked trails, virtually every corner of Switzerland is waiting to be hiked, making it one of the best countries for hiking in the world.

Switzerland is a modern country that is designed with the modern hiker in mind. Mountain railways transport hikers to trailheads and vista points, luxury hotels overlook mountaineering graveyards and modern cosmopolitan cities cosy up to the shores of glittering Alpine lakes.

In summertime Switzerland, a hiker’s paradise unfolds in beautiful mountain scenery while in winter the hiking trails become pistes, home to some of the best snowboarding and skiing routes in the world.

The tales stand as tall as the mountains in Switzerland. Most of the mountaineering greats cut their teeth in the Alps and the land is scattered with their legacies. Nowhere is this more prevalent than on the slopes around Grindelwald, Lauterbrunnen and the Eiger with its deadly north face.

Since 1935, at least 64 climbers have died attempting the north face, earning it the nickname Mordwand (murderous wall), a play on the face’s German name, Nordwand.

Of all the deaths on this perilous route, perhaps the most famous are of Andreas Hinterstoisser’s and Toni Kurz’s. The Bavarians’ fatal 1937 expedition was watched and followed by the world’s media and from the comfort of hotels below them in Grindelwald. The tragic tale has been immortalised in several books and films since.

Whether it’s the hiking, mountaineering or skiing that brings you to Switzerland, you won’t be disappointed.

Further reading: Switzerland: 100 Locals Tell You What to Do, Where to Hike, & How to Fit In

Unlike the aforementioned countries, hiking infrastructure is in its infancy in many African nations. There are some fantastic hikes to be found across Africa, particularly in East Africa, such as Kilimanjaro and Mount Meru in Tanzania, the Tigray region in Ethiopia and several regions of Kenya.

However, most of these destinations require local guides and/or permits and often lack the kind of hiking infrastructure found in the other countries on this list.

South Africa is the exception. Africa’s southernmost country offers some of the continent’s best multi-day hiking trails, crossing landscapes ranging from rugged shorelines and Indian Ocean horizons to lion-stalked bushveld and high mountains. It deserves the title as one of the best countries for hiking.

If you’re after long-distance hiking, then the best of Africa’s fledgling trails is found in the Rim of Africa. The route traverses South Africa’s rugged Cape Mountains and follows old pathways, existing hiking trails and remote pathless ridgelines, using a series of “nine traverses” across remote and often inaccessible regions of the Cape Mountains.

Further reading: Walking in the Drakensberg: 75 Walks in the Ukhahlamba-Drakensberg Park