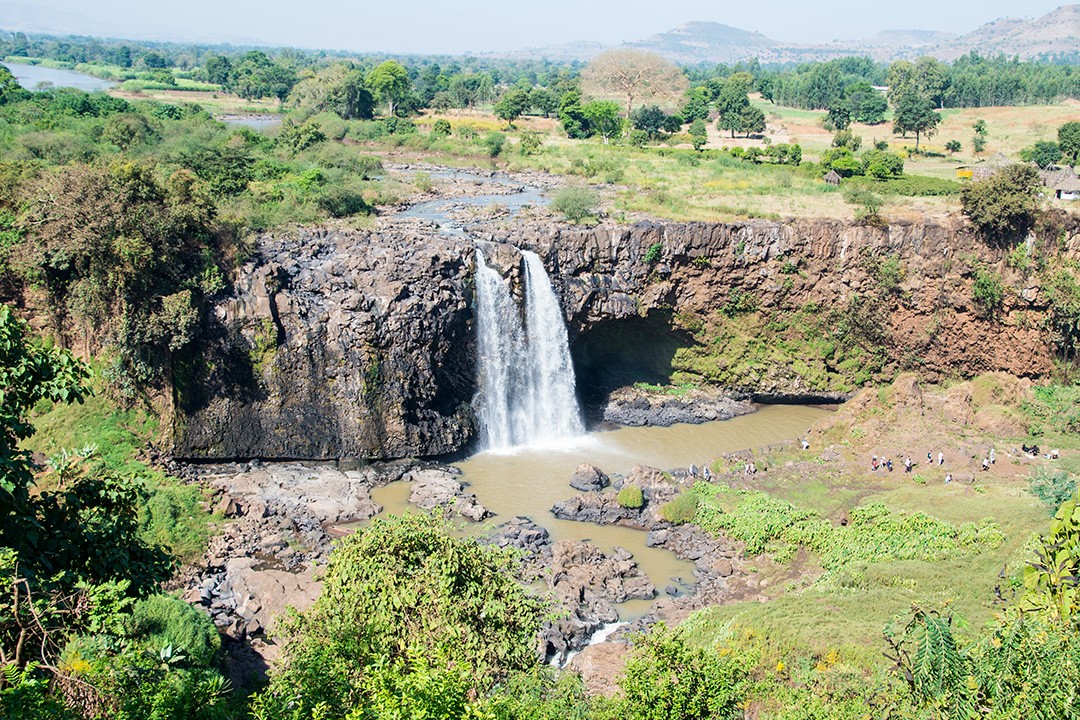 The Blue Nile Falls in Ethiopia may not be a match for its grander neighbours, but following the footsteps of famous explorers still makes for a fine day out

The Blue Nile Falls – or Tis Abay in Amharic, meaning “great smoke” – is a somewhat poor relation to the famous waterfalls found in listicles. It’s no Angel, Iguazu, Victoria or Niagara, but the 42m-high (138ft) Blue Nile Falls still offers a dramatic display.

Originally, the Blue Nile meandered away from Lake Tana before plunging violently over the side of a 400m (1,312ft) wide gorge into a chasm below. Unfortunately, due to hydroelectric projects upstream, the waterfall today is only a shadow of its former self.

Nowadays, either a two- or sometimes three-pronged waterfall plummets into the pools below. The impact throws up mist and rainbows before continuing downstream towards Khartoum in Sudan where the Blue finally joins the White Nile.

We took a day trip from Bahir Dar 30km away and hiked along the footpath that leads to the first ever bridge to span the Blue Nile: the 17th-century Portuguese bridge. From here, the trail climbs upwards through tiny villages and hamlets to a number of viewpoints.

We visited on a Saturday – market day – which meant we were walking against a tide of locals on their way to trade goods, food and livestock. This wasn’t necessarily a bad thing, but it did make navigating the rocky footpath that bit more challenging!

We continued across a suspension bridge spanning the narrow Alata River and walked down to the base of the falls. The water was in medium flow, but still a sight to behold. We stood amid the rumbling rapids and enjoyed the cooling mist.

Shortly after, we completed the circuit, snaking back up and around the falls before crossing the river by small motorboat to return to the entrance and our waiting car. The entire walk was about 5km and took around 1.5-2 hours with several stops for photos and gazing.

The legend of the Blue Nile Falls is arguably the biggest reason to visit. For history buffs (like me), following in the footsteps of masterful embellisher James Bruce holds significant appeal. Bruce claimed to have discovered the falls and named the Blue Nile river as the sole source of the mighty River Nile.

In 1768, Bruce arrived in Alexandria, Egypt, on an endeavour to discover the source of the Nile, which he believed rose in Ethiopia. Two years and a bout of malaria later, Bruce stumbled upon the falls in 1770 where he promptly claimed he’d discovered the source of the River Nile – a mystery that had eluded explorers for centuries.

However, as Bruce very well knew, he had been beaten to his ‘discovery’ by a Spanish Jesuit, Pedro Páez, some 150 years earlier. Furthermore, the Blue Nile Falls merely descends into the Blue Nile, one of the two major tributaries of the Nile. The other tributary, the White Nile, is considered to be the headwaters and primary source of the Nile proper.

It took Bruce three years to return to Cairo, before finally arriving back in the UK in 1774. Several years later, in 1790, Bruce published his multi-volume account, Travels to Discover the Source of the Nile. At the time, it was ridiculed for its sensationalist claims and stories. It was surprising then that later explorers confirmed that much of what Bruce transcribed contained substantial geographic accuracy.

Bruce described the Blue Nile Falls as “a magnificent sight, that ages, added to the greatest length of human life, would not efface or eradicate from my memory.”

Today, this may seem hyperbolic, but what the waterfall lacks in flow, it makes up for in legend. A hike to its base is well worth the effort if only to follow in the footsteps of those who sought the source.

What: Visiting the Blue Nile Falls, 30km from Bahir Dar in Ethiopia.

Where: We stayed at Rahnile Hotel, a clean and comfortable business hotel in the city centre. Our room was spotless and had an excellent shower (with strong water pressure and water that stayed hot!).

The hotel isn’t on Lake Tana like some of the more expensive outfits in town, but it offers good value for the price. The wifi is generally reliable and the local breakfast is super tasty. The staff are helpful and always ready with a smile and helped us organise our excursions. All in all, Rahnile is a solid choice for exploring Bahir Dar and beyond.

When: The best time to visit the Blue Nile Falls in Ethiopia is August and September when the flow is at its strongest.

From around January to March, the flow is weak and offers little spectacle. Unfortunately, this period falls within the best time to visit Ethiopia: October to March when temperatures are most pleasant, rainfall is lowest in most parts of the country and clear blue skies are almost guaranteed.

How: We booked our Blue Nile Falls tour with the (rather overzealous) tour agent at Rahnile Hotel. Don’t worry about asking for him; he will find you. Don’t accept the first price quoted. We haggled down to 2,300 ETB ($83 USD) for two people for two half-day tours: the first to the Blue Nile Falls, the second to the island monasteries. Note that there were additional costs at both sites. At the Blue Nile Falls, these were as follows in ETB:

We reached Bahir Dar using a public Coaster bus from Gondar: 100 ETB ($4 USD) per person. Touts at the bus station are very aggressive, so be prepared to bat them off. On the bus, avoid sitting right at the back. We had five people squeezed into four seats (six people if you count the baby!). Note that we boarded the bus at 9am and departed at 10.15am while we waited for the bus to fill up.