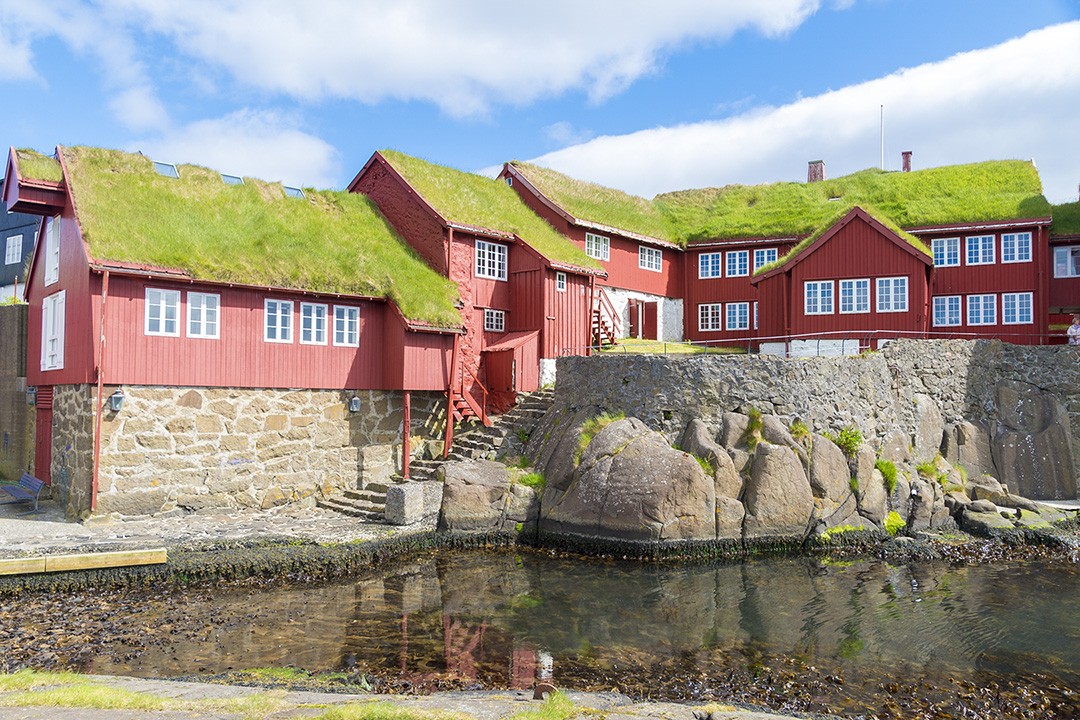 Positioned in the heart of the Gulf Stream, adrift in the North Atlantic at 62° north, the Faroe Islands lie to the northwest of Scotland – about halfway between Norway and Iceland.

The remote archipelago comprises 18 rocky islands connected by a series of tunnels, bridges and ferries. Just a short hop from the UK via Edinburgh, the islands are a paradise for hikers and outdoor enthusiasts.

We spent four days in the Faroes and thanks to the curiously long days (sunset was around 11.30pm), we managed to pack plenty in, from seeing puffins in Mykines to hiking Sørvágsvatn Lake where the largest lake in the Faroe Islands stretches to the ocean.

We share the most interesting facts about the Faroe Islands we picked up on our trip.

Interesting facts about the Faroe Islands

1. Many houses in the Faroe Islands have turf roofs, a tradition that stretches back more than a thousand years. Not only do they look charming, they provide thermal insulation and protection from the rain.
(Source: CNN)

3. Vikings then settled the Faroe Islands during the 9th century.
(Source: The Independent)

4. The Prime Minister’s phone number can be found in the phone book.
(Source: The Telegraph)

5. The turf roof ‘parliament jetty’ of Tinganes (which translates as ‘The Thing’) is thought to be one of the oldest parliamentary meeting places in the world, dating back to 825AD.
(Source: The Independent)

7. There are no official prisons in the Faroe Islands. A short-term grass-roofed detention centre is located at Mjørkadalur which is used for nonviolent offenders serving brief sentences. Prisoners being held for more than a year and a half are sent to prisons in Denmark.
(Source: Faroe Islands Tourism Board)

8. There are only three traffic lights in the whole of the Faroe Islands – all located in the capital, Tórshavn. Find out more in our tips for driving in the Faroe Islands.
(Source: National Geographic)

9. One of the most interesting facts about the Faroe Islands is that no trees grow on the islands naturally. There is a handful of small plantations scattered throughout, but there are no indigenous trees.
(Source: Belfast Telegraph)

10. In April 2019, the Faroese temporarily closed down parts of the country to repair popular tourist sites. Around 100 ‘voluntourists’ worked with locals as part of a campaign to promote tourism and sustainability.
(Source: The Guardian)

11. There is a shortage of women in the Faroe Islands, so men have been increasingly finding wives from countries in Southeast Asia. In a population of just 50,000, there are now more than 300 women from Thailand and the Philippines living on the islands, making up the largest ethnic minority in the Faroes.
(Source: BBC)

12. In the Faroe Islands, you are never more than 5km from the sea.
(Source: Google Maps)

14. The Faroese are one of the few nations that continue to whale. As it is not done for profit, it does not contravene the global ban on commercial whaling that has been in effect since the 1980s. The Faroese government describes whaling as a “natural part of Faroese life” and residents continue to hunt pilot whales, which are not endangered.
(Source: CNN)

15. In 2006, National Geographic Traveler elected the Faroe Islands as the world’s most appealing island destination from a selected list of 111 islands and archipelagos.
(Source: original unavailable)

16. The Faroe Islands’ largest lake, Sørvágsvatn Lake, is located in close proximity to the ocean. It is famous for its view of “the lake over the ocean”. Photographed from a certain angle, it looks as though the lake looms on the cliffs high above the ocean. In truth, it lies behind the cliff, only 30-40m higher than the sea.
(Source: National Geographic)

17. The fishing sector accounts for about 97% of all exports and half of the nation’s GDP. The second largest industry is tourism.
(Source: CIA World Factbook)

18. Niels Ryberg Finsen, a Faroese physician, won the Nobel Prize in Physiology or Medicine in 1903 “in recognition of his contribution to the treatment of diseases, especially lupus vulgaris, with concentrated light radiation”.
(Source: The Nobel Prize)