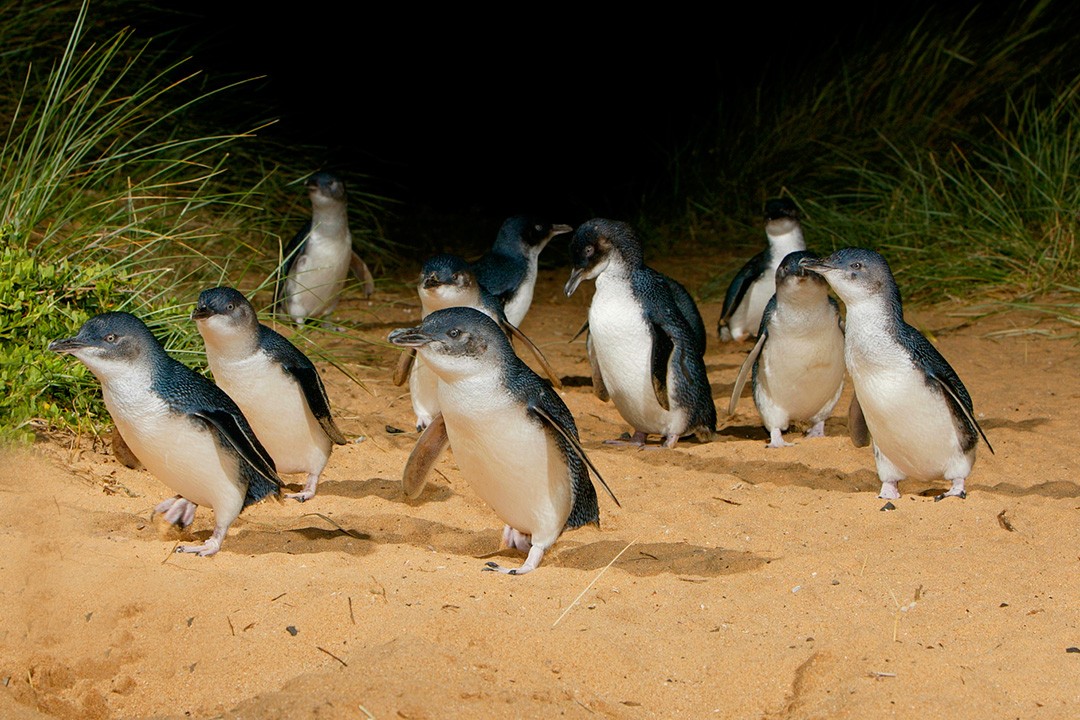 There is a palpable tension in the air. It reminds me of the atmosphere at a standing-only gig just before the doors open: everyone acts calm but then rushes forward in a desperate attempt to secure a good spot, pushing people like me – short, slight, little – to the outer margins of the room.

Luckily, spectators at the Phillip Island Penguin Parade aren’t so aggressive. Yes, there is an eagerness to get in but there is no pushing or shoving. What’s more, Peter and I have ‘Penguins Plus’ tickets which allow us into a quieter seating area.

We stream in with the crowd, then peel off to a barrier where we brandish our tickets like pearls. Inside, we are delighted with our decision. The Plus seating area far is quieter and calmer.

The Penguin Parade in particular promises a spectacle like no other. Tonight, we are told, we will see hundreds of little penguins emerge from the sea after a day of hunting fish. We will watch them pause on the beach, then waddle up to their cubbyholes. Hundreds, they say.

I am sceptical, as is my default setting. My brush with penguins in the Galápagos was mere seconds long and Penguin Island from Perth was lovely but I didn’t see any in the wild. The promise of hundreds seems utterly fantastical.

We take our seats on a tiered platform, agonising over the best place to sit. We choose the second row, deciding that it offers the best balance between proximity to the penguins and vantage over the beach. (Note: Actually, the front-row seats are the best.)

The Phillip Island Penguin Parade time changes depending on the month and season. Today, it will start around 8.15pm, so we have an hour’s wait. During this time, we are allowed to use our phones and take pictures of the beach.

Thereafter, we have to put them away. Penguins are highly sensitive to light so allowing a hundred screens in their faces would be completely irresponsible. As such, phones and cameras are strictly forbidden during the parade itself.

It is 8.20pm and there is no evidence of penguins. I prepare for disappointment. I’ll be happy to see just a dozen, I think.

And then we see some movement on the beach. It’s subtle at first: a pair of inky figures silhouetted against the seeping twilight sky. They are joined by another and then another. All at once, the Phillip Island Penguin Parade begins in earnest. The little penguins waddle up the beach and pause at the clearing a few metres away.

Some huddle while others shiver and shake. Some bumble around and fall head over heels after bumping into friends. This spot on the beach is their first opportunity to rest, safe from airborne predators, and so they gather in their droves: tens, dozens, then dozens upon dozens.

They are utterly charming as they move around gracelessly and bumble and fall and play. Some waddle up a path to the right of the platform while others head beneath us to their warm and cosy homes.

Finally! Penguins in the wild! And not just one penguin like in the Galápagos or six on Penguin Island but dozens. Hundreds! I am utterly elated.

They stream and stream and keep on coming and I can’t quite believe that we can do this. I can’t believe that this spectacle – these precious Disney moments – actually exist.

The embargo on phones makes the experience more special – as if moments like these are not to be captured.

We watch the Penguin Parade for an hour as the chill in the air grows strong. Peter and I are dressed for Australian summer, underprepared for the bracing sea breeze.

We endure the cold for a while longer – when else will we see something like this? – but as we glance down the beach, we see hundreds more coming like a charming little army.

Eventually, we agree that we’ve seen enough. We leave the platform and spill out onto the general access area where penguins are wandering beside the walkways.

Leaving the complex takes nearly an hour as we stop to watch in delight as a pair cuddles here and a lonester huddles there. Eventually, we take our leave. The next day, we ask how many penguins were in the parade that night and are told 613.

I’ve said before that travelling widely makes some wonderful experiences fade in comparison to earlier incarnations: Erta Ale is amazing but not as much as Yasur; Franz Josef is cool but less so than Perito.

One might think that the Phillip Island Penguin Parade with its constructed walkways, ticketing tiers and queuing system felt less organic than, say, diving with sharks or swimming with whales but I can’t fault it. The parade was utterly enchanting and one of the best things I’ve ever seen.

What: The Phillip Island Penguin Parade from Melbourne, Australia.

Where: We stayed at Somerset on Elizabeth in the heart of Melbourne’s Central Business District (CBD). Our serviced apartment was extraordinarily spacious and included a kitchen, living room and large bedroom.

The staff at Somerset on Elizabeth are clearly highly trained and were wonderful in dealing with our car after a rather stressful drive through the city. (Valet parking is included in the $45 AUD/day parking fee so just stop outside and hand your keys to reception.)

The CBD offers plenty of restaurants, shops and activities. Melbourne’s Chinatown is a stone’s throw away and includes a host of tasty options. The drive from Melbourne to Phillip Island takes approximately 90 minutes and can be done in a day trip.

When: The Penguin Parade runs all year and penguins can be seen regardless of the weather. With that said, the best time to visit Phillip Island is the summer months of Dec-Feb when the weather is best and rainfall is low. Visit in February to avoid the school holidays.

How: The Phillip Island Penguin Parade has several ticket options. We recommend the Penguin Plus level – well worth the extra cost. Book early, especially if visiting during school holidays.

The penguins emerge at sunset and we recommend arriving at least an hour before (see the opening times for timings). If you book Penguins Plus tickets, aim for the seats closest to the beach (in particular, the clearing on the right side of the seating when facing the beach).

There are several other worthy sights on Phillip Island including the Koala Conservation Centre and The Nobbies headland, so it’s worth getting there a few hours before the Penguin Parade to explore the island.