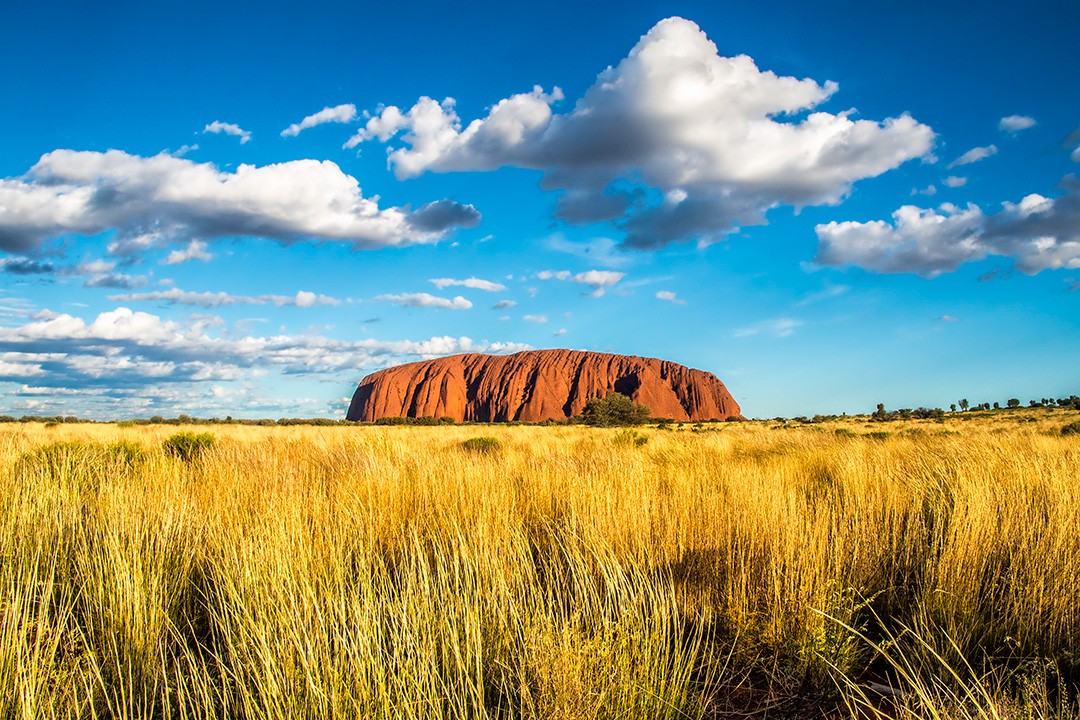 A 1,500km detour and two nights’ camping with spiders, snakes and dingoes – would the Uluru Rock Tour prove worth the pain?

Uluru, that iconic behemoth, that clay-red monolith, that sun-scorched sentry… that epic pain in the backside.

Yes, it’s big and, yes, it’s special, but bloody hell it’s far away. Almost right in the middle of Australia, Uluru is a major endeavour. Nearly every other sight in the country is scattered along the coast, which means planning a trip to Uluru involves a hefty detour from the rest of your route.

We spent an age debating how to get to Uluru. Plane? Train? Automobile? Invoking the god of logistics? In the end, we decided to fly to Alice Springs and hop across to Uluru. Of course, what looks like a hop on the map is a six-hour drive in the vast stretch of the ‘red centre’.

We booked a 3-day Uluru Rock Tour and met our guide, Kurt, at 5am in Alice Springs. Joined by 11 other guests, we set off to Uluru.

Vast vistas of lonely shrubs faded into sand and dune, all red and baking under the extreme summer sun. The temperature hit 38°C (100°F), forcing our engine to overheat.

A few hours in, Kurt turned off the air conditioning in an effort to cool the engine, resulting of course in melting passengers. Welcome to Australia, folks!

Luckily, Kurt had a plan and flagged down a sister vehicle returning from an earlier Uluru Rock Tour. We swapped vehicles with little guilt about the others’ long drive ahead. They, after all, were finishing their tour while we were just beginning.

With sweat cooling on our skin, we settled in for the journey to Kings Canyon, a yawning chasm of sheer red cliffs and vertinginous walls halfway between Alice Springs and Uluru.

There, we started an hour-long hike, but were soon thwarted by closures on the trail, deemed too dangerous in such strong sun. Welcome to Australia, folks!

To be honest, I think we all felt reprieved from a particularly exhausting task. We packed back into our van and headed to camp.

I say ‘camp’, but there was no such thing. Rather, we settled for the night in an unsheltered spot in the wide open outback, clinging onto our swag bags (a sleeping bag of sorts made of heavy canvas).

I’d known that we’d be camping in the outback, but as we unfurled our bags in the falling darkness, I wondered what the hell I was doing there. This is Australia, I thought. This is the outback. This is the Australian outback and I would be sleeping out in the open where things could crawl into my bag and across my skin and into my nose and ears.

Never mind all the things that can kill you – spiders, snakes and bees – there were a million more things that were just plain creepy.

I won’t lie. The first night of our Uluru Rock Tour was a test not least due to the ants which utterly besieged us. They weren’t the only challenge of course. As I zipped into my swag bag, Peter told me to freeze. I scrunched shut my eyes and begged him to “get it off me, get it off me, get it off me”. What ‘it’ was I still don’t know. Peter described it as a brown inch-thick centipede crawling up my swag bag.

Kurt told us to tuck our shoes well under our bags as dingoes ­– feral Australian dogs – were partial to smelly shoes. We were indeed visited by a dingo, but I didn’t see it and neither did I care to. I was more concerned by the creepy crawlies.

I pulled on my eye mask, pressed in my earplugs, zipped up my swag bag and tried to ignore everything around me.

You may have guessed that I survived. In fact, in the early hours, I woke to a vast sweep of stars and the Lord of the Rings theme song in lieu of an alarm. The surreal, magic quality of that moment negated the struggle of the preceding evening. Never before had I seen the Milky Way so clearly with my naked eye. The stars swirled and shone and made me strangely joyful, as if this were a moment I’d remember forever.

Leisurely, we rose and breakfasted as the embers of the campfire slowly faded and died. We gathered up camp and headed to a more traditional campsite where we took refreshing showers and drinks.

Soon after, we drove to Kata Tjuta, a striking group of 36 voluminous domes huddled together and forming deep valleys and gorges. We set off on the Valley of the Winds walk, all of us in high spirits because we’d survived the night before. We could officially say that that we’d camped in the Australian outback.

In the afternoon, we finally headed to Uluru, stopping along the way for a viewpoint or two. Before long, we arrived at the most famous sight in all of Oceania.

Travel writer Bill Bryson described Uluru as strangely familiar and I felt the same way. Here was the rock I had seen in movies, postcards and documentaries, a rock that symbolised past conflict and enduring pain, a rock held sacred by Australia’s indigenous people.

I’d long wondered if Uluru would be worth the trip – it was ‘just a rock’ after all, but I was wrong. Uluru lives up to the hype. It looms long and heavy, and is unavoidably affecting. In walking around its base, one almost feels a presence: a formidable,  sombre presence, as if Uluru were placed there by design and not just accident. It’s silly I know, but that is how I felt.

We spent the afternoon exploring small caves in Uluru-Kata Tjuta National Park and wandering around the rock before heading to a viewpoint for sunset.

There, we were joined by dozens of other tour groups, all with portable tables, chairs and flutes of champagne. As they jostled with their tripods, I felt thankful for our low-key tour and our camp in the outback, miles from the crowds in their comfortable abode. We had had an experience. A real experience – as pretentious as that sounds.

Our second night was spent at a more traditional campsite. We still slept out in the open and there may have been a snake or two, or perhaps they were legless lizards. We’ll never know. It was, after all, Australia. Not to worry. We all survived the tour and we’d all do it all again.

What: The 3-day Uluru Rock Tour, starting and finishing in Alice Springs in Australia. Pick-up and drop-off options vary.

Where: We camped in the outback, the first night in a makeshift campsite. There was a drop toilet, but no running water or electricity. Wear long sleeves and trousers and pack insect repellent, ideally one you can spray over your clothes and sleeping bag too. The second night was in a more traditional campsite with a shower and toilet block.

In Alice Springs, we stayed at Desert Palms, a set of self-catering studios a 15-minute walk from the centre of town. Our studio was clean and functional and offered a calm retreat away from the fray.

The gated complex includes a swimming pool, on-site laundry, parking, wifi and all-important air conditioning. Each studio comes with a verandah set among palm trees and bougainvillea, lending the place a tropical feel – a welcome touch in the middle of the desert!

When: The best time to visit Uluru is May to September when the weather is cooler and it’s safer to hike. The colours of the rock are more vibrant at this time of year and you are more likely to see waterfalls, plants and animals.

How: We made use of our Greyhound Travel Pass to book our Uluru Rock Tour. The Greyhound Travel Passes are an excellent way to bridge the vast distances in Australia. Their range of passes offer choice, flexibility and freedom to explore the entire country. The passes can also be used to book experiences such as The Rock Tour (one of their outback experiences) as well as accommodation.

It’s important to note that the Uluru Rock Tour is designed for adventure and you will camp out in the open in the Australian outback. Also note that the organisers offer a protective head net for $5 AUD. Buy it and keep it in your daypack at all times. It’s well worth the cost for keeping flies at bay.

In terms of how to get to Uluru, you can reach the area by bus, train, car or plane. We accessed Alice Springs using Greyhound Australia before joining the Uluru Rock Tour. Alice Springs is served by The Ghan rail service by Great Southern Rail  running between Darwin and Adelaide. Car hire is also an option for visiting the area, we recommend Hertz Australia.

Use Skyscanner for booking flights to Uluru (AYQ) or Alice Springs (ASP).