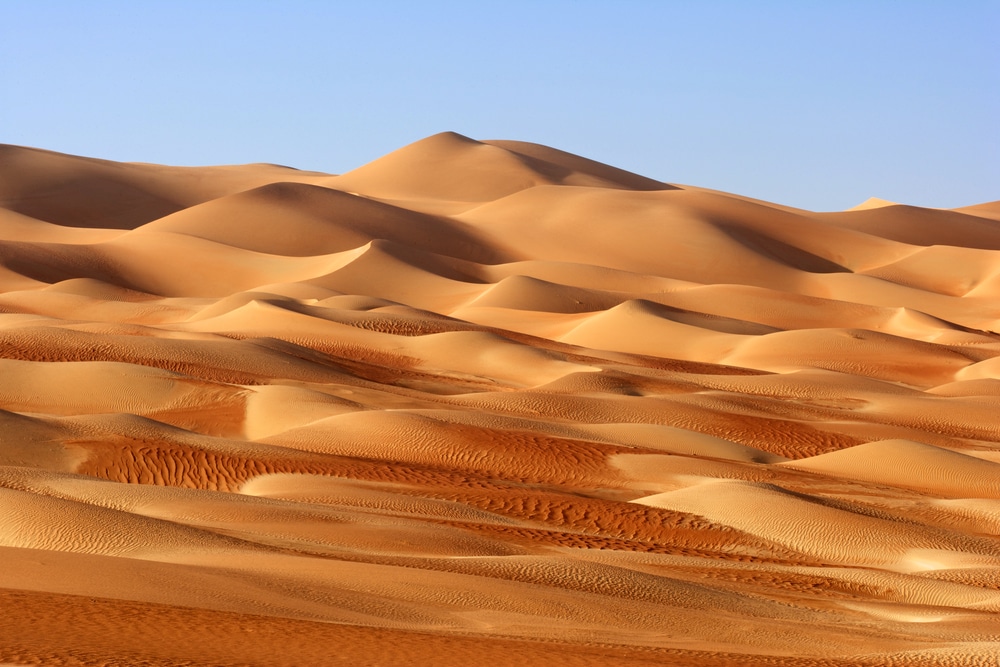 We explore the best things to do in Oman, from modern Islamic architecture to the jagged peaks of its wild interior

Oman is an intriguing blend of the modern world and old Arabia. Unlike some of its neighbours, overdevelopment is yet to saturate the country. Lying on the southeastern coast of the Arabian Peninsula, Oman is the oldest independent state in the Arab world, sharing borders with the UAE, Yemen and Saudi Arabia.

Despite its neighbours, the country remains stable, peaceful and comparatively progressive. In fact, it was named in 2019 as the world’s safest country for expats.

Oman’s broad spectrum of landscapes, from dramatic forts and spectacular mountains to wind-blown deserts and pristine coastline, makes it a more adventurous alternative to Dubai. Here’s what you shouldn’t miss.

Best things to do in Oman

For us, those dive spots will just have to wait.

Most visits to Oman begin in the capital city of Muscat. Pinched between the mountains and the ocean, Muscat is a refreshing take on the skyscraper-choked cities of the Gulf States.

The Omani port capital may not have the overt glitz of its high-rise neighbours, but it exudes an understated charm and natural beauty rarely seen in the more popular cities of the UAE, Qatar and Bahrain.

Read our post on the best things to do in Muscat.

In the foothills of the Al-Hajar Mountains sits the pretty village of Birkat Al Mouz, which roughly translates as ‘pool of bananas’ – an apt name considering its position amid a sea of banana and date palm plantations.

Most visitors pause briefly at Birkat Al Mouz to take in the view of the traditional mudstone buildings en route to Jebel Akhdar. However, there are several other interesting sights to see in the village including the UNESCO World Heritage Site of Falaj Al Khatmain, an active falaj (irrigation channel) nearly 2.5km long.

In the heart of the Al-Hajar Mountains, a dramatic range stretching 700km across Oman and into the UAE, lies Jebel Akhdar or ‘Green Mountain’, home to some of Oman’s finest montane scenery. Perhaps the most impressive viewpoint is found at Diana’s Point located in the grounds of Anantara Hotel.

Diana’s Point is named after Diana, Princess of Wales, who visited the spot with Prince Charles in November 1986. A plaque reads that the couple arrived by helicopter to what was then an untouched wilderness.

Nearby is the deserted village of Wadi Bani Habib. Perched at the bottom of a valley, this cluster of decaying mudstone buildings is fringed by abundant walnut trees, making for a timeless scene.

Despite being Oman’s highest peak at 3,009m (9,872ft), Jebel Shams is not the main draw to the region. Instead, it’s the astonishingly deep surrounding ravine of Wadi Ghul, known locally as the Grand Canyon of Arabia.

With vertiginous 1,000m (3,281ft) limestone cliffs plunging from the canyon rims, Wadi Ghul has a number of well-positioned car parks with expansive views and access to several established hiking trails.

Deep in the wild rockscape of the Al-Hajar Mountains sits the mountain village of Wakan. Positioned 2,000m (6,562ft) above sea level, Wakan is a celebrated beauty spot perched above the Batinah Plain.

Oman’s most historic town has a postcard-perfect clutch of minarets, souks and sand-coloured buildings bunched around one of the country’s grandest forts. Nizwa played an intrinsic role in Oman’s history for well over a millennium, serving as the capital of the interior and seat of the land’s ruling imams.

Today, the town has reinvented itself as one of Oman’s most welcoming to foreign visitors. The centrepiece is Nizwa Fort where it’s possible to catch a ‘Razha’ performance – a surprisingly joyous war dance.

On Fridays, the traditional circular Nizwa Cattle Market is a popular draw for Omani farmers and tourists alike.

Al Hamra is one of the best-preserved old towns in Oman. Built in Yemeni style, the town’s terraces of honey-coloured mud-brick buildings melt into the foothills of the Al-Hajar Mountains.

Nearby is the tiny village of Misfat Al Abryeen, wedged in the shadow of a soaring escarpment. The hamlet, alongside the sloping limestone cliffs at the foot of Jebel Shams, completes the quintessential Omani mountainside tableau.

The so-called ‘Rustaq Loop’ is strung out along Highway 13 and provides an absorbing one-day drive that takes in some of Oman’s finest forts, scenic wadis and even a hot spring. The three historic castles of Nakhal, Al Rustaq and Al Hazm are the showpieces of the tour, but it’s also worth pausing in Al Kasfah Hot Spring for a quick look around.

Al Rustaq and Al Hazm forts have both been renovated and benefit from upgraded facilities and accessibility. Both offer outstanding views of the surrounding scenery.

The magnificent Wahiba Sands (also known as the Sharqiya Sands) is the Oman you’ve seen on postcards. The towering sand dunes reach up to 100m (329ft) and constantly shift in the wind. The region is virtually uninhabited apart from a handful of semi-permanent tourist camps and some local Bedu who live in scattered makeshift encampments.

Most visitors camp – or glamp – for a night beneath a sky full of stars. The peace is somewhat disturbed by dune-bashers tearing around the sand drifts in their souped-up 4WDs leaving tyre tracks and litter in their wake.

The Empty Quarter (the English translation of Rub’ al Khali) makes up the largest portion of the Arabian Desert and is the world’s largest area of continuous sand at around 650,000km2.

It is one of the driest regions in the world, virtually uninhabited and largely unexplored. It is magical in its expanse and silence, putting Wahiba Sands to shame.

There are much the same activities on offer here. However, Rub’ al Khali is harder to reach with its access points at Ubar near the Saudi border in the south of Oman.

Oman’s most memorable wildlife experience is observing thousands of endangered Green turtles haul themselves from the ocean and up the beach to lay their eggs at the Ras Al Jinz turtle-nesting sanctuary.

The remote beach, on the easternmost point of the Arabian Peninsula, is under strict government protection and the only way to visit is to join an escorted tour. Only 200 people a day are allowed to visit, so booking is absolutely essential.

Oman has over 2,000km of coastline and with it comes some of the finest diving in the Arabian Peninsula. Oman has many of the same species of coral and marine life as the Red Sea, but receives a fraction of the visitors.

Things to do in Oman: the essentials

What: Exploring the best things to do in Oman.

When: The best time to visit Oman is October to March when the oppressive summer heat settles to sunny days and balmy nights. It’s worth noting that it does rain in Oman so plan accordingly.