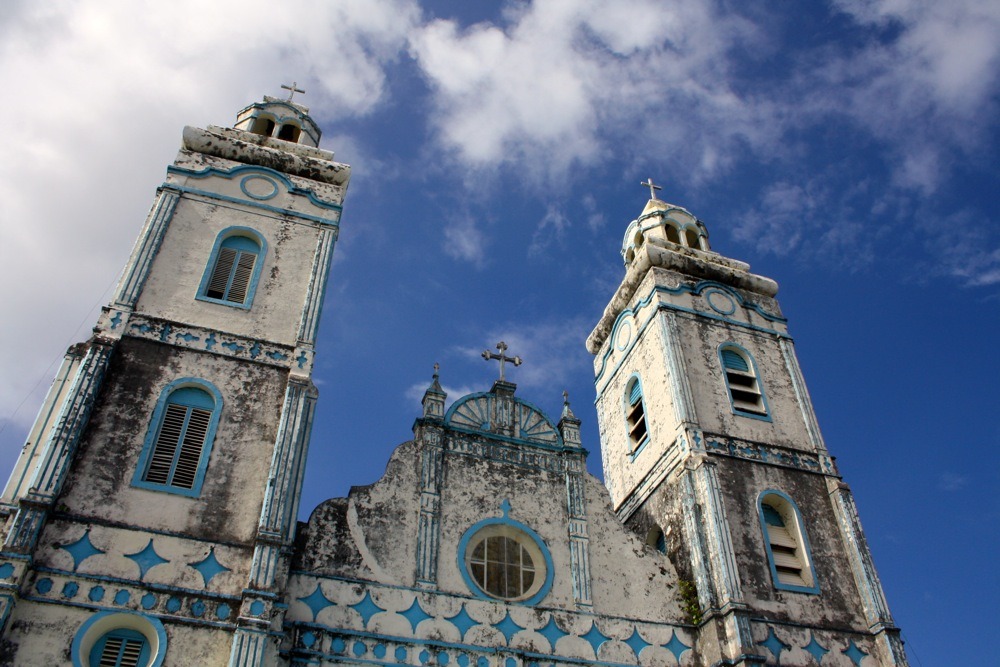 “Do you have faith?”
Peter stumbled for a response. “I’m sorry?”
“Do you have faith?” the priest repeated matter-of-factly.
Peter stopped loading his plate with cucumber sandwiches. “Um, yes,” he managed before quietly shuffling away, elaborating no further.

The question, anodyne as it was, was unexpected. We had enjoyed a relaxing day at his friend’s summer wedding in the beautiful English countryside and weren’t expecting to share our religious affiliations with the head of service in the buffet queue.

Both Peter and I have tricky relationships with religion. He was brought up as a Methodist Christian but became an atheist in his early twenties. And I… well, I was born a Muslim which, for a girl who always wanted to see the world and never get married, was… problematic.

With this in mind, when a local Samoan family invited us to the Sunday service at their Catholic church, we both took pause. It was a great opportunity to experience some Samoan culture, but we weren’t sure if our attendance was appropriate.

As if on cue, Lena, our host, said: “Do not worry if you are not Catholic. We welcome all people in our church.” Then, with a smile, added: “There’s a free lunch after.”

With our British reserve put to rest, we accepted the invitation. After breakfast, I ruffled through my backpack for something smartish to wear. I always pack a conservative outfit for occasions like this, so pulled on a pair of capris and a white cardigan, which coincidentally happened to be the colour of the congregation. We packed into Lena’s van and off we went.

As the service started, I felt Peter shift beside me. For me, this was a charming cultural experience; for him, it was also a reminder of childhood and the ensuing confusion he felt about his faith. The language may have been different but the sentiment was the same.

Later, when he recognised the cadence of the Lord’s Prayer, I saw him mouth along to it in English and join in the punctuating ‘Amen’. I guess some things are more enduring than we think.

I watched quietly as members of the congregation kneeled, crossed themselves, prayed and sang. At one point, our normally vivacious and uber-confident host had tears rolling down her face.

As I listened to the hymns, my mind wandered. If I, in that tiny village in deeply religious Samoa, could stand shoulder to shoulder with people who held beliefs different to mine, perhaps the rest of the world would catch up one day.

Lonely Planet South Pacific includes a comprehensive guide to the country, ideal for those who want to both explore the top sights and take the road less travelled.