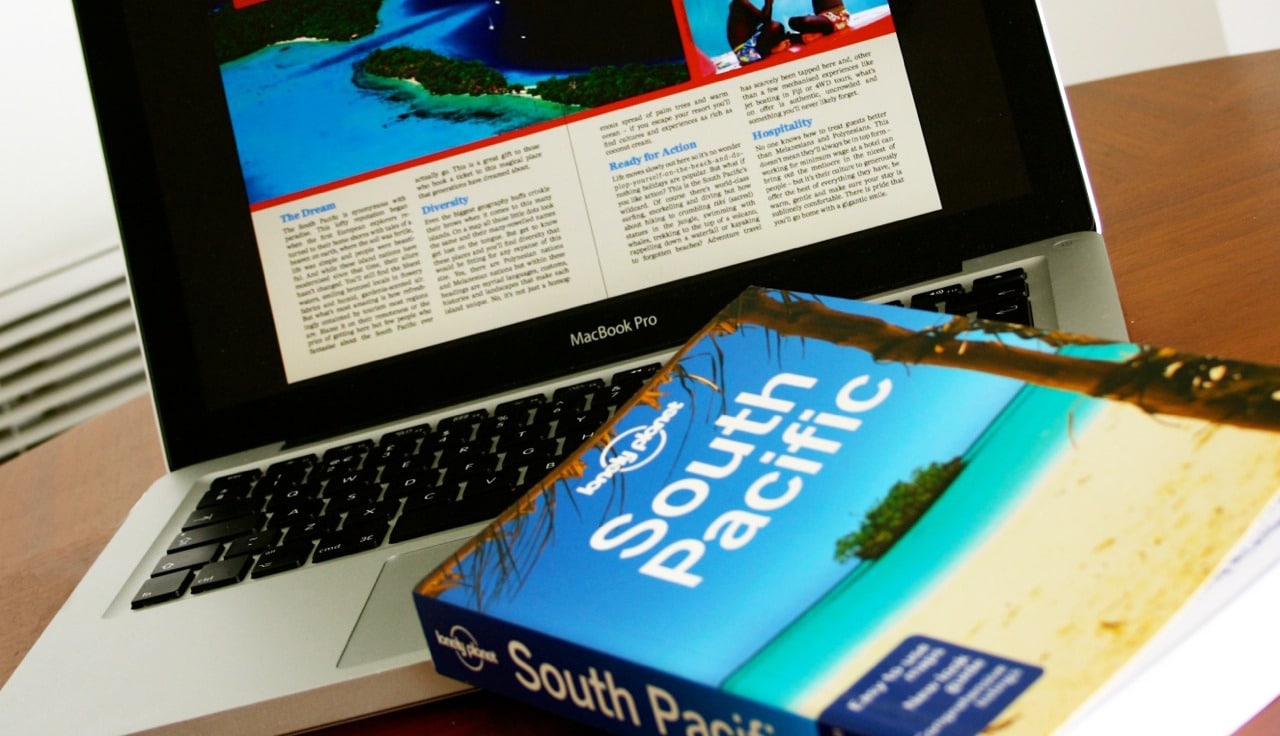 My colleague picks up the two guidebooks strewn across my desk.
“Are you planning to take these with you?”
I nod.
“Won’t they be too heavy?”
I shrug. “Peter will carry them.”
“You could just look it all up on TripAdvisor.”
“I prefer guidebooks.”
Her lips curl into a look that is half confusion and half disdain. “Okay,” she says in a tone that suggests it’s not okay at all.

Unlike me, she has never bought a guidebook – a trend that seems to be growing, not only for practical reasons like hers (lighter, cheaper and more timely content online), but for superficial reasons too. In much of the travel press, ‘not in the guidebook’ has become a lazy shortcut for denoting authenticity. Articles and blogs make pejorative references to ‘guidebook-toting’ tourists and for many travellers, travelling without a guide has become a badge of honour.

The truth is, travel guidebooks are invaluable resources when you’re in a country to which you’ve never been. Naturally, there will be some ‘sheep’ who are all having the same banana milkshake at the same roadside cafe because page 207 in their guide to Thailand told them to do it but that doesn’t mean everyone with a travel guidebook is a conformist and a bore.

Here are five reasons why I won’t be throwing out my travel guidebook any time soon.

1. It knows more than the travel press

Travel blogs and newspaper travel sections love to talk about places that are ‘not in the guidebook’ but, in reality, most of what they cover is in the guidebook. Take National Geographic’s ‘Beyond the Guidebook’ series. Today, I had a look at the 12 destinations covered on the first page: Acadia National Park in the USA, Zambia, Phnom Penh in Cambodia, the Bohuslän Coast in Sweden, Venice in Italy, Cooperstown in New York, the Dolomites in Italy, Minneapolis in the USA, Amsterdam in the Netherlands, Bonito in Brazil, Helsinki in Finland and Berlin in Germany. All but one of these (Arcadia National Park) is covered in the corresponding guidebook in our collection.

I then had a look at one of the blog’s composite features on America’s best beach towns. Again, all but one of the 11 destinations are covered in our guidebook to the USA (namely, Cayucos). Perhaps the name Occasionally Beyond the Guidebook would be a more suitable name for the blog.

Take another example: Darley Newman, the host, writer and producer of Emmy-Award winning series Equitrekking, touts her show for covering places you won’t find in guidebooks and yet, in this 2012 interview, she chose Turkey’s Cappadocia as the ‘untapped destination people should know about’ – the same Cappadocia Lonely Planet named as Turkey’s most interesting site back in 1973.

2. It knows more than other travellers

In 2013, Expedia ran a Twitter chat in which it asked followers to suggest places that were off the beaten track. Travel writer Robert Reid analysed three pages of suggestions from would-be travel experts and found that a Lonely Planet guide covered every single suggestion. This is not to say that you’ll never stumble on a magical uncharted location, but the idea that ‘real’ travellers know more than the travel guidebook is misguided and really rather arrogant. In general, guidebook authors live in the country they’re writing about and will be far more familiar with it than some random guy in a ropey bar.

3. It knows more than (many) locals

This point is often controversial but it’s true. Could I, a lifelong Londoner, claim to know my city better than the person who wrote a book on it? No. I could suggest a good restaurant or two that isn’t covered but in terms of must-sees, a travel guidebook will do a much better job than me.

On the road, I always ask for recommendations from locals but this method of finding things to do is best used in conjunction with a guidebook rather than as a substitute. A guidebook does not preclude authentic experiences by default; you just need to be open to other sources of information and use them together.

4. It can save you money

A travel guidebook will tell you all the tips and tricks you need to know to keep budgets down. Whether it’s a bargain basement hostel, a concession you didn’t know about, or a cheaper day to visit an attraction, a guidebook will have a comprehensive list of money saving tips.

One piece of advice is to do the bulk of your research beforehand. If you’re planning to visit several islands in, say, Vanuatu like we will be, use the guidebook to see if there’s a cheap way to get around before you get there. This way, you can make provisions (e.g. more time, money or an advance booking) that you may not be able to when you get there.

5. It gives you context

I value crowdsourced information like that offered by TripAdvisor, but I do find that it lacks deeper context. Blog posts and travel articles simply don’t have enough real estate to really delve into the history and culture of a country. They may give you a list of cultural dos and don’ts but they won’t cover the nuanced reasons why certain things are unacceptable.

My favourite part of a long journey is curling up with a quality travel guidebook and reading about the various vagrancies of what a country like: for example, the fact that there is a religious sect in the Vanuatuan island of Tanna that worships Prince Philip as a divine being, or that in Tajikistan the unibrow is considered a highly attractive feature in a woman, or that in Nairobi there is a group of female prostitutes that have become resistant to AIDS. This is gold.