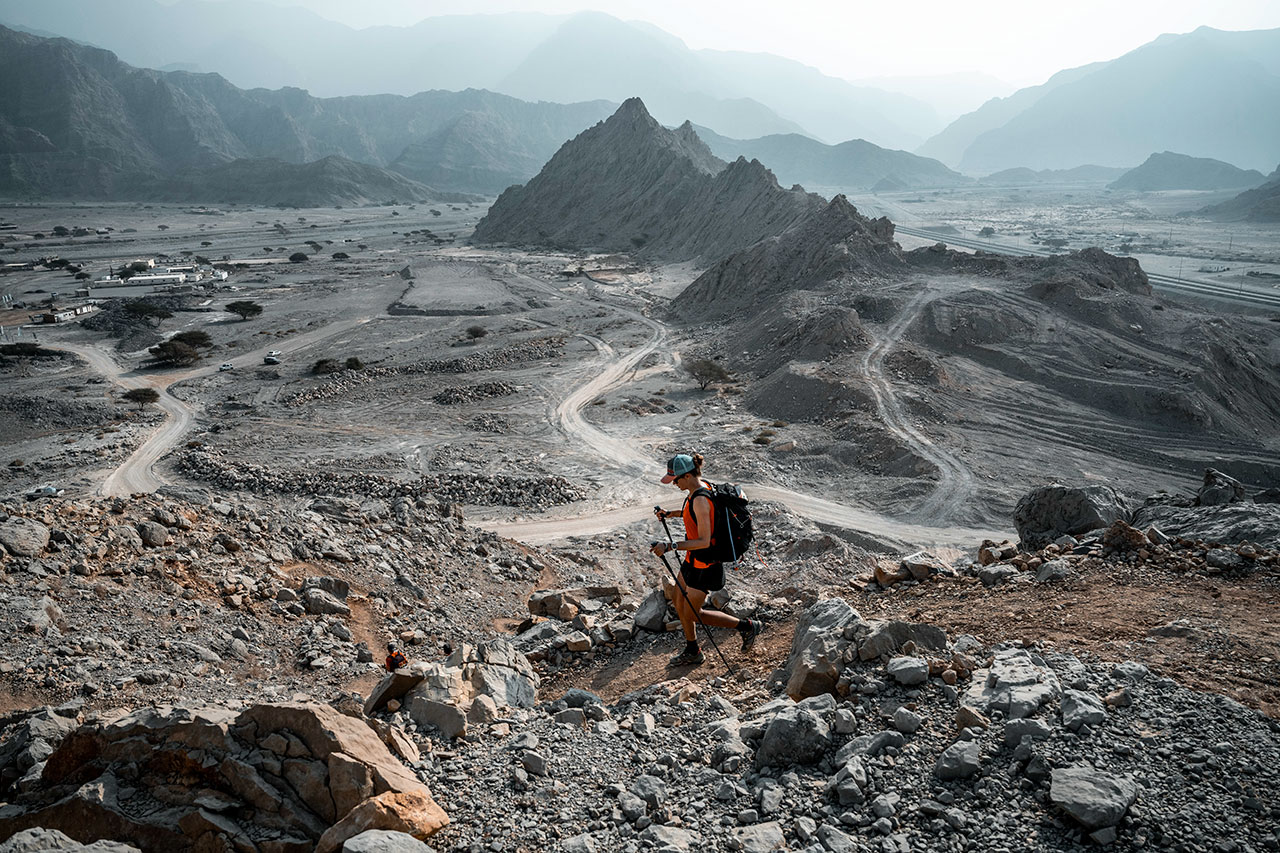 Kia feels the burn on the Highlander UAE, a 30km two-day trek in the Hajar Mountains

When I agreed to do the Highlander UAE, I didn’t know that the entire universe would conspire against me. I’d planned to be fighting fit because I knew that the trek would be challenging, but due to a healing wound for which I needed stitches I wasn’t able to exercise for the three weeks leading up to the trip. This impacted my fitness and, in turn, my ability to deal with the 30°C heat. On top of this, in what felt like a cosmic cruelty, I found myself battling a cold.

Add to this the fact that I hate camping and that I’ve never trekked with a heavy pack before and you have a recipe for misery.

Still, I was committed.

Peter and I set off at 7.30am on the first day. I had done multi-days treks before – five days on the Salkantay Trek in Peru and four in the Simien Mountains of Ethiopia – but both of those were fully guided, meaning that the tour company transported our tents and luggage from campsite to campsite and provided cooked meals. This time, we were responsible for carrying everything we would need, more similar to the traditional trekking that Peter loves so dearly.

For us, Highlander was a nice halfway point. These branded treks are a blend of guided and self-sufficient trekking. The logistics are largely taken care of with internal travel to and from trailheads, routes, food, maps, checkpoints and campsites all pre-arranged. Trekkers are only responsible for getting themselves and their gear to the start point (and walking the trail of course). The treks are non-competitive, but there are daily checkpoints to pass through to gain a certificate and medal upon completion.

The Highlander UAE would be Peter’s fourth such trek after Croatia, Greece and Georgia – but my first. It’s partly why we opted for the ‘Experience’, a two-day 30km version of the Highlander UAE instead of the ‘55’, a three-day 55km version.

I started off confidently. My pack, which weighed about 10kg, was comparatively light thanks to Peter carrying our tent, stove, gas and cookware. I also benefited from hiking poles, which are said to take 20-25% of the load off the legs. Our pace was good, the temperature was pleasant and we had plenty of water (a whopping four litres each given the heat and the fact that there were no natural water sources).

It wasn’t long before I needed to stop and refuel. Compared with Peter, I have a fast metabolism, which is great when I’m stuffing my face with chocolate on the sofa, but less so when burning through energy on a challenging trail.

As the sun climbed the sky, I began to feel the heat – all while repeatedly pausing to blow my nose thanks to my pesky cold. Still, I was in good spirits. This wasn’t as hard as I had expected.

Oh, the naivety! Soon, we hit an uphill stretch and I immediately began to struggle. My scrawny legs lack power even on the faintest incline. Climbing a steep slope with nearly a quarter of my body weight on my back quickly grew exhausting.

Peter noticed that I had slowed significantly and offered to carry my pack. When I stubbornly refused, he reminded me that he had promised to carry my pack for one kilometre out of every five when I first agreed to the Highlander UAE. Well, if you insist…

I handed it over, certain that I could now match his pace. He’s always too fast on the trail – and I’m too slow – so I assumed this would match our paces. But no. He still stormed ahead despite now carrying a substantial 25kg. ‘It’s good training for Denali!’ he announced brightly before skipping ahead like a perky mountain goat. Grumbling to myself, I followed.

My spirits lifted when we reached the highest point in the UAE: a secondary summit on Jebel Jais, the tallest mountain in the country. There, we took a moment to enjoy the view and rest and regroup – but not for long. We were wary that we had to reach our first checkpoint by 12.30pm at the latest. There aren’t usually time limits on Highlander treks but due to some hikers stopping for a leisurely lunch at a restaurant last year and reaching camp several hours after dark, the organisers introduced one for safety.

We hauled up our packs and carried on, trudging through the heat, me regularly stopping to sniffle and feel sorry for myself. When we reached the first checkpoint at 11.30am, I settled down for lunch, feeling rather pleased that we had arrived a whole hour ahead of the time limit. But then I heard that some hikers had already reached the camp, completing the day’s entire 20km distance in a mere four hours. Peter and I were just halfway.

He assured me that there was no benefit in finishing too early. ‘You just end up sitting around the campsite all day,’ he said, speaking from experience of his time on the Georgia trek. I took that as licence to take my time as we rejoined the trail. We were faced with a steep downhill stretch which, although less taxing than uphill, was punishing on my knees and hips. Scree made the progress even slower; one slip could send you toppling off the mountain.

We picked our way along the trail in the exhausting heat. As my body burned through lunch, I began to feel fatigued and close to overheating. When we paused in a rare bit of shade, I noticed that my legs were shaking. Peter offered to take my pack but I insisted that I was fine.

The ensuing stretch from 1pm to 3pm was utterly draining. The sun was searing, I was dehydrated despite drinking constantly, and my legs were ready to give out. Peter insisted on taking my pack. When I quibbled, he explained that our progress was too slow. At this pace, we were in danger of reaching camp after dark.

That’s when I hit my low point. I was depleted. I had no more power to draw on. I had been giving it my all. And now I was being told that it just wasn’t good enough.

‘But we’re not that slow,’ I whined. ‘Hardly anyone has overtaken us.’
‘That’s because they’re all ahead of us,’ said Peter.

This jolted me out of my sulk. Could that be true? I knew we weren’t last – I could see hikers behind us – but the possibility that we might actually have to hike in the dark was genuinely concerning. I relinquished my pack to Peter and forced myself to pick up the pace. When he ‘encouraged’ me to go faster yet, I could feel myself boiling over.

‘Would you rather get into camp after dark or have me faint?’ I asked snippily. Not long after, I insisted I was going sun-blind. ‘My eyes are stinging,’ I whined. ‘They’ve never felt like this before.’

Peter didn’t slow. ‘It’s just the sunscreen melting into your eyes,’ he said. ‘It happens to me all the time.’

‘Oh,’ I said, remembering that people like him do this for pleasure. We trudged on. Despite my moodiness, I knew that Peter had a point. The sun was punishing, but it would be so much slower when it disappeared. I fought through my fatigue, forcing myself to put one foot in front of the other.

Finally, mercifully, we spotted the checkpoint that marked the end of the day. There, victory awaited and in more ways than one. Firstly, we had done it. We had hiked 20km in the scorching sun, But, more sweetly for me, we learned that we were firmly in the middle of the pack: around 60 out of 120 hikers.

‘Oh really?’ I said with a pointed look at Peter. ‘How interesting.’ I looked up at the sky. ‘And the sun is still high and bright.’

He flashed me that stupidly handsome grin of his. ‘Plenty of time to put up our tent!’

We had our Highlander passports stamped and carried on down to camp where I collapsed onto a rock, not an ounce of energy left in my stores. Meanwhile, Peter put up the tent, as cheerful as a Duracell bunny.

As darkness fell, we saw torches high on the slopes above: other hikers who didn’t have someone like Peter to hurry them along. My sympathies went out to them; my fellow slow hikers.

One by one, they arrived, raising cheers all across camp. As I joined in the applause, I was hit with an understanding. This was the beauty of Highlander. Everyone here had faced a collective challenge and though some were faster than others, we all empathised with each other. Each of us understood what the other had achieved. This is why I laughed when, the next morning, I overheard a pair of fellow hikers:

Chuckling, I joined the trail behind them. That day, we were trekking only 10km, half of what we’d covered the day before. I was confident and in good spirits.

Our second day on the trail

I won’t say that the second day was easy. Peter had to carry my backpack on the uphill stretches, but, mentally, I was in a better place. It was only in the last kilometre, so close to the finish line, that I began to struggle again. The heat was completely enervating and there was not a scratch of shade. Still, we continued, on and on, like an Escherian staircase: up, down, around, up, down, around. By the time we reached the finish line, I could barely muster a smile.

I tugged off my boots and collapsed into the shade. Once I caught my breath, I got chatting with a fellow hiker. When I mentioned that Peter had had to carry my pack, she cocked her head in recognition.

‘Oh, are you the girl with the blue backpack?’ she asked.
I winced. My reputation, it seemed, preceded me. ‘Yes,’ I admitted sheepishly.
‘I saw your partner carrying two packs and worried that someone was ill.’ She arched her brow. ‘He was storming ahead though – still quicker than me.’
‘Yes, I said. ‘He’s annoying like that.’

Soon, the bar was open and Peter and I toasted our finish with an Aperol Spritz. The girl with the blue backpack had survived.

So, knowing what I know, would I recommend the Highlander UAE? Yes, but only if you’re fit and can cope with the heat. The trek has certainly piqued my interest in other Highlander Adventures. With over 15 to choose from – including several in gentler climes – I’m interested to find out more. Now that I’ve tried multi-day trekking properly, I’m ready to explore. Excited? No, but I’m ready.

Where: There are two designated campsites where there is ample space to pitch tents. The sites also have access to water and basic camping toilets. Food for the evening meal and the following day’s breakfast and lunch is provided at both campsites.

When: The trek takes place in November (this year it ran from 18th to 20th November), which is an ideal time for trekking the Highlander UAE. The weather is likely to be very dry and very hot with temperatures close to 30°C. However, the evenings can get cold so make sure you pack warm clothing too.

How: The logistics, including internal transfers to and from trailheads, routes, food, maps and campsites, are all arranged and included in the price. However, hikers are responsible for organising their travel to the start point and from the endpoint. Highlander Adventure can help with booking transfers, including carpooling, after registration.

Hikers can also be proactive and join the Highlander Facebook group to arrange transport and car shares as well as other logistics.

Hikers are responsible for organising international flights. Book flights via Skyscanner for the best prices.