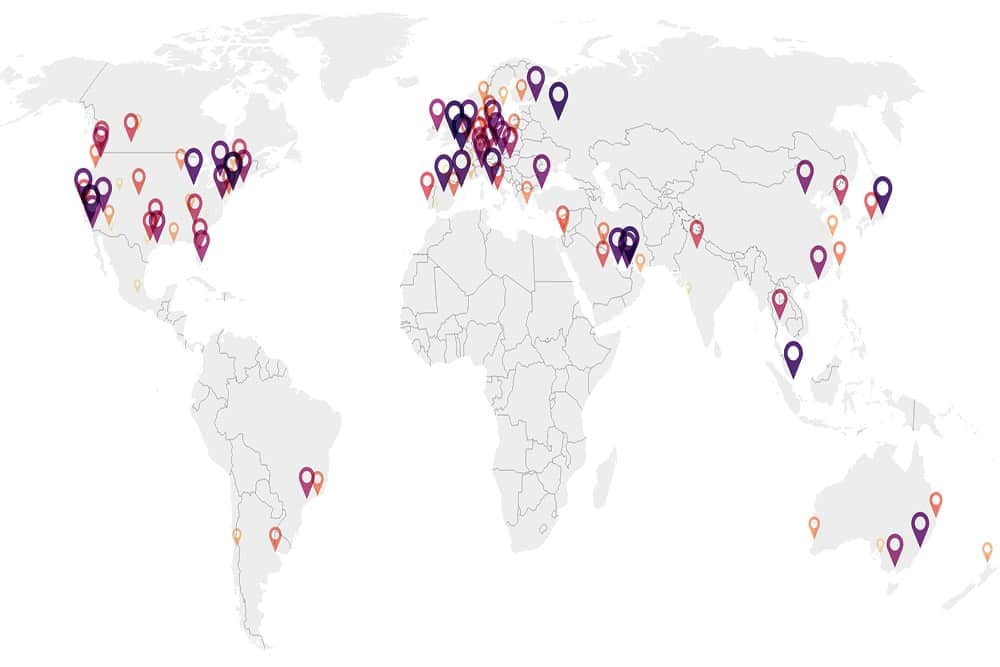 The 100 best cities in the world have been ranked for 2022 based on where to live, work, invest and visit. We take a look at the results

This proportion is projected to increase to 68% by 2050. Wherever the world’s expats, digital nomads and remote workers choose to relocate, chances are it will be in a city.

With this in mind, Canadian consultancy film Resonance, which has offices in Vancouver, Montreal, Singapore and New York, has published its annual report ranking 100 cities with populations of over one million.

They use 25 factors grouped into six categories covering a range of criteria including climate, access to outdoor space, education and work prospects, population diversity, leisure options and even social media popularity.

The six categories and 25 factors are:

Click on a city in the map below to see how it scored in each category.

What is the world’s best city?

London has been named the best city in the world for the sixth year in a row. The ‘capital of capitals’ has taken the top spot despite concerns surrounding the city’s post-Brexit future. However, the report’s authors believe the city continues to draw talent and visitors to the en masse and will eventually weather the storm and even emerge stronger.

The UK capital scored highly in the programming, promotion, product and prosperity categories but was some way behind in the place category. Unemployment and a waning economy have meant the city’s number one position is under serious threat.

“Cities are the engines of the global economy and the badges of human ingenuity. Yes, they’ve been hobbled over the past 18 months, exposing the long-ignored foundational and institutional problems that manifested on their streets and in their hospitals and seniors homes. But they’re also leading — like they always have — the recovery and future-defining next stage of human innovation.”

London is closely followed by the usual suspects of Paris and New York. Paris has moved up a place from last year, overtaking New York, thanks to its ambitious sustainability policies which have included expanding cycle routes, reducing city speed limits and tree planting.

As the “capital of capitals”—still waist-deep in an opaque pandemic slurry—negotiates the uncharted, perilous terrain of a post-Brexit world, London continues to reign the planet’s best cities for the sixth year running. Its position at the top, however, has never been more tenuous.

Even though New York was the initial epicentre of America’s coronavirus outbreak, the report remains optimistic about the city’s future. It points to the high number of Global 500 companies located in the Big Apple as well as the city’s endless nightlife, shopping and attractions that sustain its ‘enduring allure’.

Moscow, the world’s fourth-best city, wins praise for its international events such as the 2018 FIFA World Cup Final hosted at Moscow’s Luzhniki Stadium in the city’s 360-acre Olympic complex as well as its plethora of cultural showcases.

Moscow has also benefitted from the first so-called ‘post-Soviet generation”’ of Muscovites who have travelled the world and are now returning with suitcases full of ideas that they’re unpacking to huge effect in their proud city.

“Russia’s beguiling capital is a cultural gold mine fighting for its life.”

Dubai has sneaked into the top five of the best cities in the world for the first time thanks to its ‘alluring blend of over-the-top experiences, Arab heritage and luxury shopping’. The city continues to attract the highest proportion of foreign-born residents of any city in the world, and they tend to be well-educated – ranking 23rd for Educational Attainment globally.

Tokyo is Asia’s highest-ranked city in sixth place and the safest metropolis on the planet. The city is poised to benefit from the range of new infrastructure constructed for the Olympics which will no doubt come in handy in the future.

“The futuristic metropolis is tapping its ancient feudal roots by investing in street-level livability and resident well-being — in the wake of the Olympics.”

The report also highlights Tokyo’s popularity with shoppers continually expanding food scene. The metropolis offers as many restaurants as the top five cities combined – more than 100,000 in total!

Wherever you decide to live, work or visit, make sure you have travel insurance. We’ve used several providers over the years and are now covered by an annual multi-trip policy from Heymondo. The policy covers us for theft, medical expenses up to $10m USD, cancellation and Covid-19 coverage.