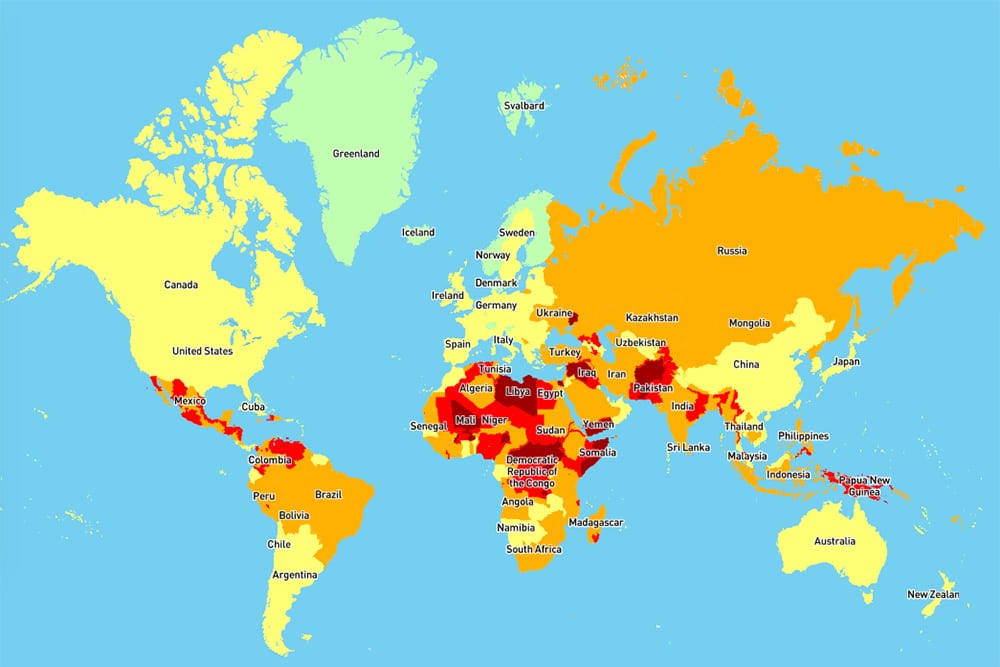 Now in its 11th year, the Travel Risk Map is an interactive tool produced by security specialists at International SOS. It is used to predict the safest and conversely the most unsafe countries in the world.

International SOS uses a number of criteria to assess how the conditions in the country may impact visitors’ security and safety including ‘the threat posed to travellers and international assignees by political violence (including terrorism, insurgency, politically motivated unrest and war), social unrest (including sectarian, communal and ethnic violence) as well as violent and petty crime.’

Other factors assessed include transport infrastructure, the capability of security and emergency services, and the threat of natural disasters. It’s also possible to use the map to assess medical risk and road safety standards around the world.

The report goes as far as to predict eight upcoming potential geopolitical events that could affect global security. These events include the upcoming US presidential election, tensions in the Korean peninsula and social disturbances and identity politics in Europe.

MOST DANGEROUS COUNTRIES IN THE WORLD

These are the 10 most dangerous countries in the world according to International SOS. They have been assessed as carrying an ‘extreme travel security risk’.

SAFEST COUNTRIES IN THE WORLD

At the other end of the spectrum, the following 11 countries have been assessed as carrying an ‘insignificant travel security risk’ to travellers and therefore the safest countries to visit.

Most countries in Europe along with the USA, Australia, New Zealand and Canada have been assessed as carrying a ‘low travel security risk’. Ukraine is the only European country categorised as ‘high’ or’ extreme’ security risk.

Some countries fall into more than one category where regions within a country carry varying security risks to travellers.

The full interactive map by International SOS can be accessed here.